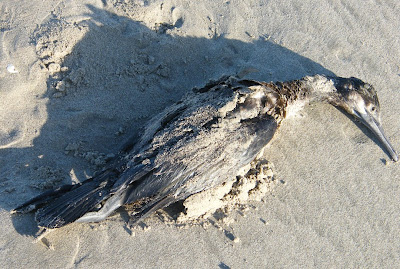 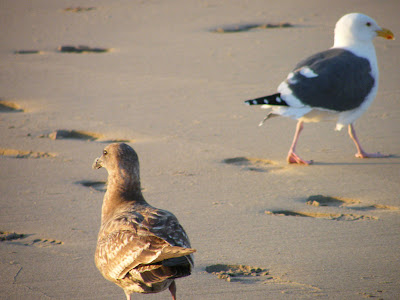 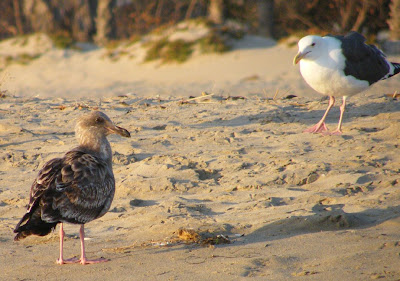 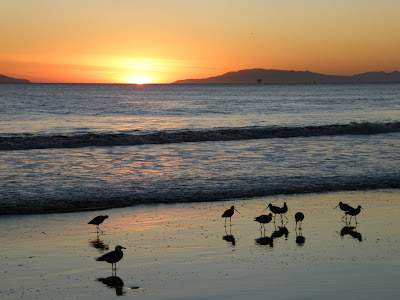 Posted by coyotescribe at 9:01 PM 2 comments:

The oil-soaked bird standing on shore was a cormorant

I sought help after my last post, to find out what kind of bird I had seen last Friday standing on Port Hueneme shore. It was a magnificent-looking seabird, except that his body was covered in black oil. 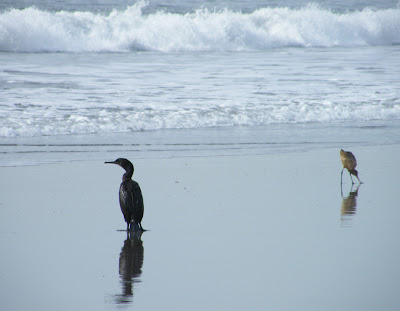 Liz, a volunteer bird rescuer for Wildlife Care of Ventura County, wrote back to me, and identified the bird as a cormorant. She had just rescued one the day before. She said they were a bit more aggressive than the grebes, but that they could still be caught by throwing a towel over them. And unlike the grebes, they usually stand if they come to shore (grebes cannot function or survive on land). It's also not necessary to make a donut-shaped cushion for the cormorant to sit on, like you need to do for the aquatic soft-bellied grebes. Liz cautioned me about the beaks of the cormorants; they have little hooks at the end. I would need to be careful if I were given a second chance to rescue this one, or another cormorant in the future. 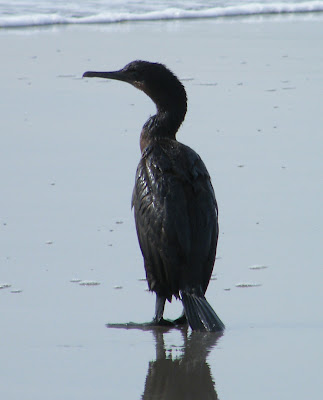 Liz also instructed that, once I throw the towel over him, it would be good to try and grab his head out through the towel, so he doesn't wriggle out. And if a bird is oiled, the best thing to do is put them in a box and keep them warm, and get them to someone who knows how to take care of them ASAP. Some oiled birds go straight to Malibu, as the Ventura/Santa Barbara facilities are not as equipped to handle this kind of injury. Liz told me she had also seen a seagull whose body was half black from oil the day she rescued the cormorant. She reiterated my thoughts exactly, "It's so sad what happens to our poor wildlife." 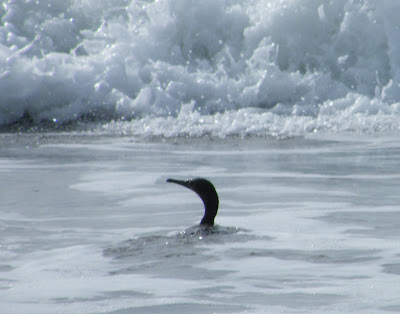 I also received a second confirmation from Anna Reams, Director of Wildlife Care of Ventura County, that this bird was a cormorant. After viewing the photos in my previous blog, she gave me additional information based on how the cormorant was swimming. Anna said that he was definitely covered with oil because he was submerged, and not floating on top of the water; that's a clear indication he is oil-soaked. I was so sorry to hear about that, as I had not known what to look for, even though once he had gotten back into the water, there wasn't anything I could've done. I am still sorry I had not tried to capture him. 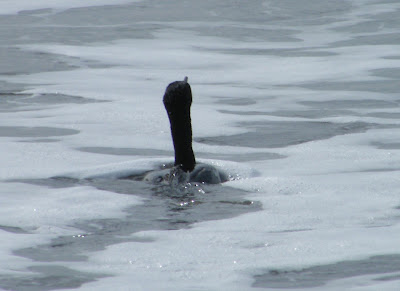 The following day I went out to the beach on what I have come to call my daily Bird Watch Beach Patrol (BWBP). I think I spotted the same cormorant, and it seemed like he was still holding on, though he was swimming low in the water. (bird on left) 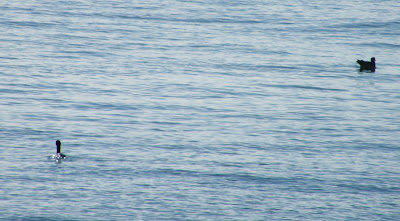 He was hanging out near the end of the Port Hueneme pier. I climbed the steps and walked out to see him. 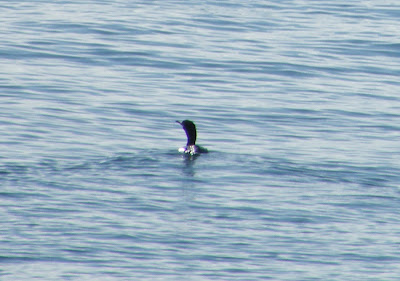 I could feel the vibrancy of his spirit. I know that sounds a bit crazy, but sometimes I can read energy, and I was darn sure it was the same cormorant. It was like I recognized his personality. 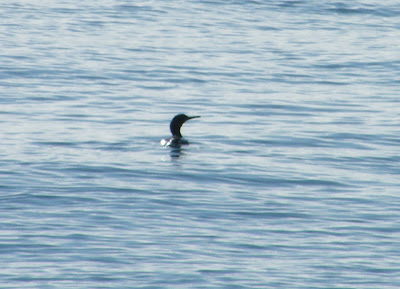 But that was the last time I saw him. I have looked for him in the past four days, but he hasn't been out there. I will be on the lookout for more of his kind, and I'll know what to do next time I see one of these beautiful birds covered in oil.

An additional side note about catching seabirds: Always get between them and the ocean before approaching them. Then you can chase them up towards the sand, because once they get back in the water, they're almost impossible to catch. They can dive under the water and slip out very easily. *But with an oiled bird especially, going back in the water may mean they will suffer from hypothermia and die. When birds get their feathers soiled, they cannot maintain their body heat, and the water seeps below the outer feathers and soaks the downy ones underneath. They die from being cold. Anna cautioned me that when I see these guys compromised like this on the beach, the best thing to do is to have a plan in my head before I attempt a rescue, because they will use the last bit of their energy to get back into the water. "You will only get one chance," she said.

Thank you Liz and Anna for all your valuable information.
Posted by coyotescribe at 3:51 PM No comments: 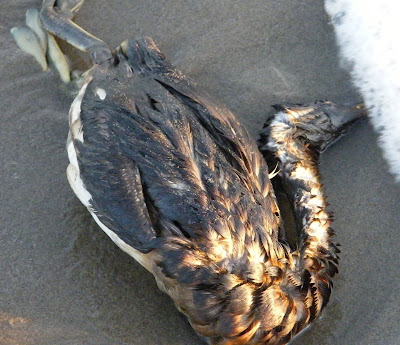 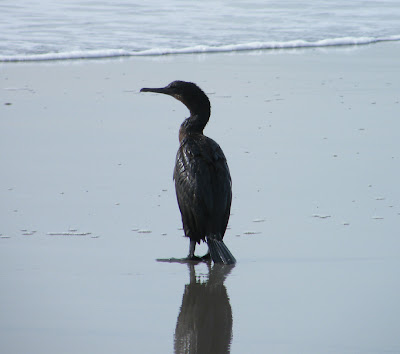 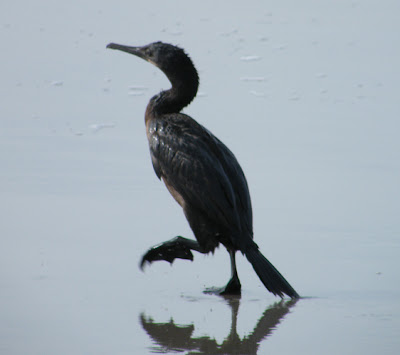 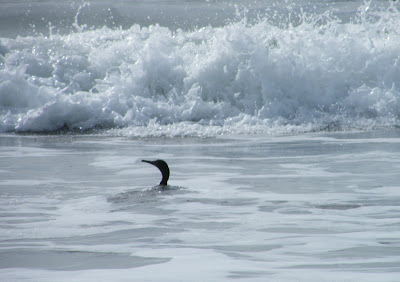 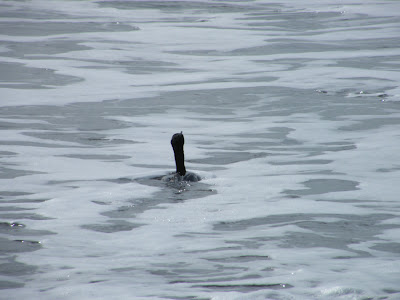 The grebe that got away... 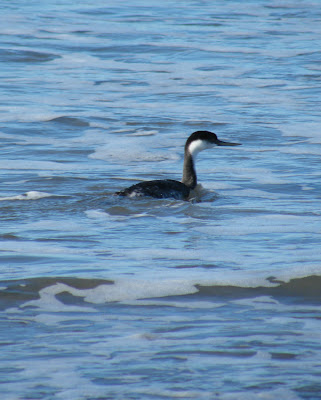 On the last day of November, my husband and I first spotted this young grebe swimming between the pilings under Port Hueneme Pier. He seemed to be having a good time, but still, we were concerned, as he was coming in close to shore. 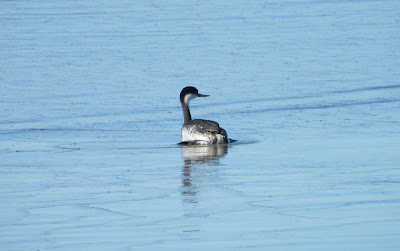 My husband ran back to the condo to retrieve a box and a donut cushion made from paper. The little grebe meandered a good distance north of the pier by the time my husband returned. The grebe kept sticking his neck under the water bobbing for fish. 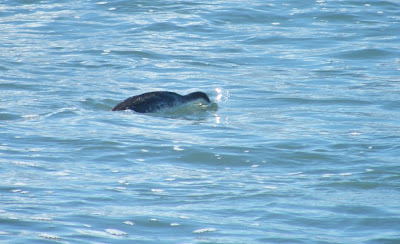 And the young grebe finally did come to shore. 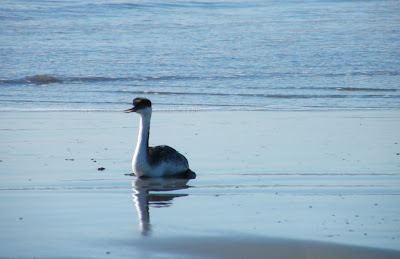 But he realized all to quickly this was not for him, and he had way too much energy to put up with me trying to rescue him. 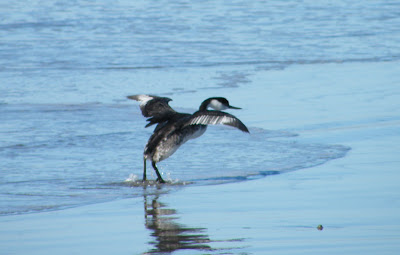 He spent about thirty seconds on the beach before hightailing it back out to open sea. I was relieved to know he was okay. 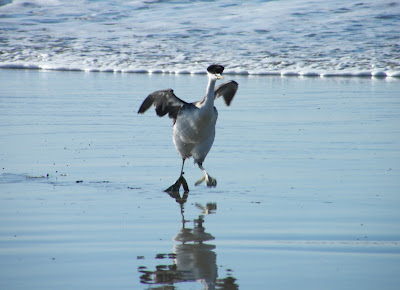 His wings spread and helped lift him to freedom. 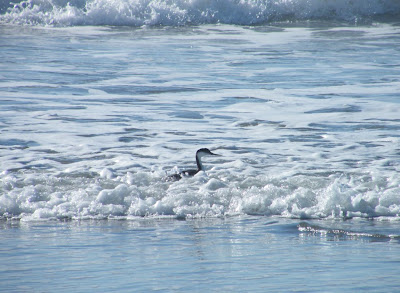 Swimming back out to sea.

I did, however, shoot a couple of photos during his brief visit to Port Hueneme beach. I am quite proud of the one below showing this grebe with a seagull. You can see the difference in the anatomy of these birds. 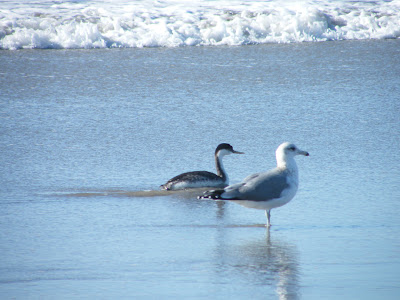