"Oh, isn't it so cute the way my dog chases the birds?"

See Spot run wild and free! (Free as a bird?)

I understand, BUT... did you know?

Dogs and humans can be the deciding factor on whether an injured, tired or distressed bird lives or dies. And it's against the rules to bring your animals onto Port Hueneme beach. 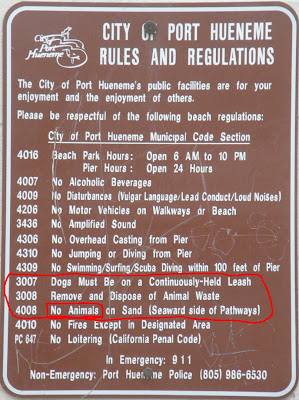 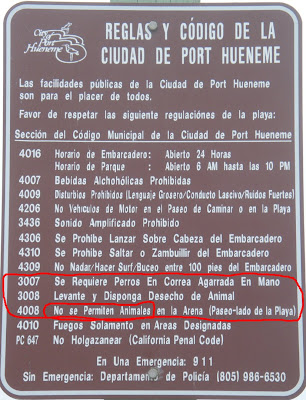 I found myself witnessing a pelican's nightmare tonight when I strolled the beach at sunset. I am posting my experience as an illustration of my point.

When I first spotted the tired guy, he was trying to negotiate the high waves. 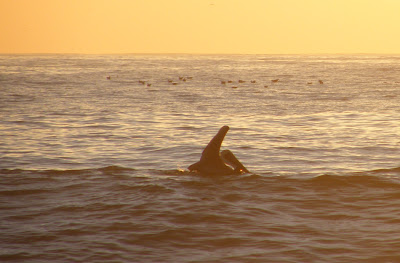 He was definitely coming in. 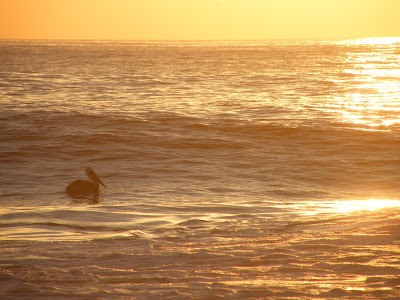 Once he got to shore, I made a wide girth around him to take this shot: 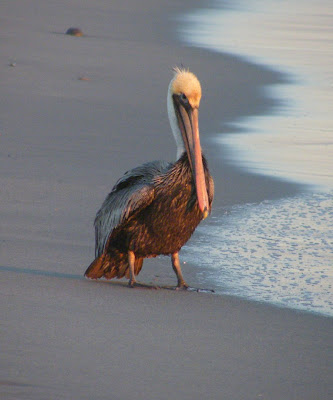 In the next photo, you can see where he stood in comparison to Port Hueneme Pier in the background: 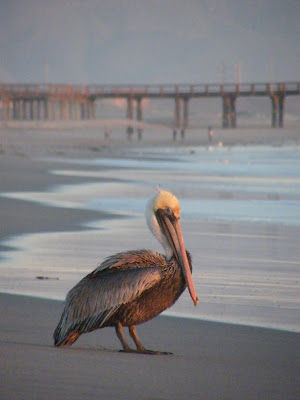 I stood by and kept an eye on him. And then I saw the man and woman with their two little dogs. I thought, "Well, that's cool. At least they're keeping them on a leash." But then they were getting awfully close to the pelican, and I was starting to get concerned. 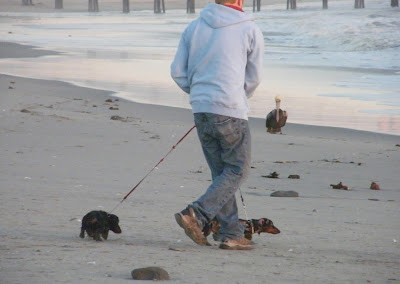 As I stood in view and took this photo, it had not been in my wildest imagination that this man would actually unleash his dogs right there where the tired pelican rested on shore. What the... ? And the two little dogs ran straight for him. I screamed, "No. No!!" But it was too late. The pelican did what all tired birds do when threatened, they go back into the sea. And he was having a hard time. He was too tired to fly, and he wasn't swimming either, more like just floating in the surf, his wings falling limp on both sides. He was just really tired, and I knew it. I was so angry at the stupid dog owners! 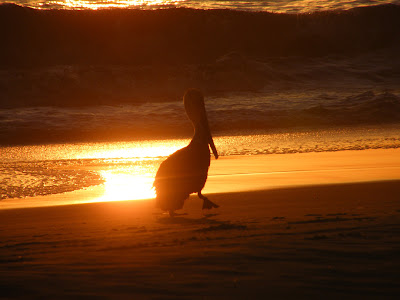 But despite this inconsiderate act, the little guy came back to shore, and walked slowly up the beach until he got to a safe resting place, by all the leftover dredge from the harbor (which I will be posting about soon). I also had to tell a group of boys with fishing poles to stay clear of the pelican. If he went back into the water again, I didn't think his chances would be good. 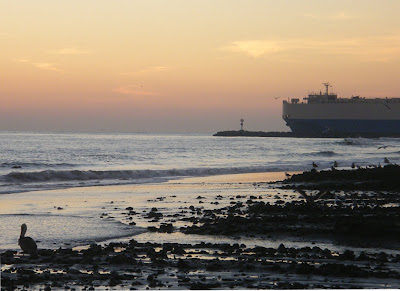 There are many threats to the wildlife in this huge seaport. As the ship sailed out of port, I sent a little energy to the pelican. 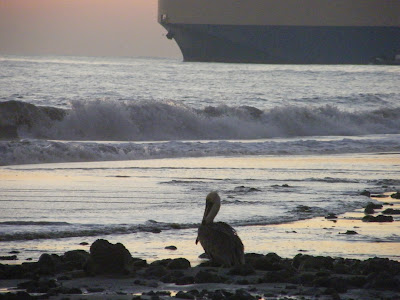 I will return to check on him first thing in the morning. Rest well, little guy.
And please, please, proud dog owners, if you're going to break the beach rules, do so with caution and consideration of these precious wild creatures.
There is also disturbing pelican news from the International Bird Rescue Research Center. (What's causing fatigued pelicans to drop from the sky?)
Posted by coyotescribe at 9:25 PM